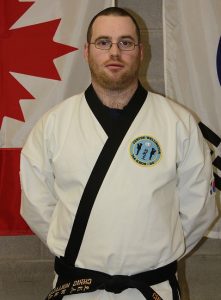 Mr. Mulligan has been studying Martial Arts for over 20 years.  As a child, he was enrolled in ITF style Tae Kwon-Do in Oakville, ON. After moving to the Centre Wellington Area in August of 1993, Mr. Mulligan joined the Fergus Branch of Chung Oh’s School of Tae Kwon Do. After a few years of training & competition he left to pursue other interests.

Years Later in 2006, Mr. Mulligan re-joined Chung Oh’s School and became an Assistant Instructor the following year. In 2007 & 2008, Mr. Mulligan was honored by being named Canadian Tae Kwon Moo Do Federations Champion of the Year.

In 2009, Mr. Mulligan had the opportunity to travel to South Korea with GrandMaster Chung W. Oh for a cultural exchange and training tour. Although the trip was a short one, he was able to learn quite a bit of information & looks forward to traveling to Korea again in the future.

Mr. Mulligan also studies Olympic Style Taekwondo, under Master David Wright and is certified by the Kukkikwon (The official governing organization for Sport Taekwondo as established by the South Korean government)

In addition to studying Tae Kwon-Do, Mr. Mulligan has spent some time training in  Shotokan Karate, Hapkido, Gumdo & other Korean weapons and currently he is also a student of Combat Hapkido.